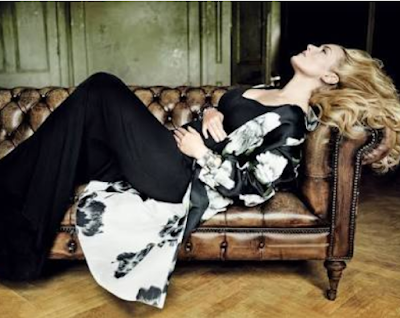 BEST OFFER For U Forever.... 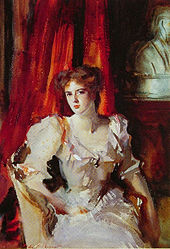 John Singer Sargent's portrait of Miss Eden shows a fashionable full breast, low neckline,
and mass of hair, 1905.
With the decline of the bustle, sleeves began to increase in size and the 1830s silhouette of an hourglass shape became popular again. The fashionable silhouette in the early 20th century was that of a confident woman, with full low chest and curvy hips. The "health corset" of this period removed pressure from the abdomen and created an S-curve silhouette.
In 1897, the silhouette slimmed and elongated by a considerable amount. Blouses and dresses were full in front and puffed into a "pigeon breast" shape of the early 20th century that looked over the narrow waist, which sloped from back to front and was often accented with a sash or belt. Necklines were supported by very high boned collars.
Skirts brushed the floor, often with a train, even for day dresses, in mid-decade. The fashion houses of Paris began to show a new silhouette, with a thicker waist, flatter bust, and narrower hips. By the end of the decade the most fashionable skirts cleared the floor and approached the ankle. The overall silhouette narrowed and straightened, beginning a trend that would continue into the years leading up to the Great War.
In early 1910, a survey of wealthy high school senior students at a private New York City girls' school found that each spent an average of $556 ($15,256 as of 2017) annually for clothing excluding undergarments, and would have spent four times that amount with an unlimited budget.

Evelyn Nesbit
In this photograph taken in 1901, has some of her wavy hair swept up to the top of her head, with the rest of her hair flowing past her shoulders in curling tendrils.
Unfussy, tailored clothes were worn for outdoor activities and traveling. The shirtwaist, a costume with a bodice or waist tailored like a man's shirt with a high collar, was adopted for informal daywear and became the uniform of working women. Wool or tweed suit (clothing) called tailor-mades or
(in French) tailleurs featured ankle-length skirts with matching jackets; ladies of fashion wore them with fox furs and huge hats. Two new styles of headgear which became popular at the turn of the century were the motoring veil for driving and sailor hats worn for tennis matches, bicycling and croquet. 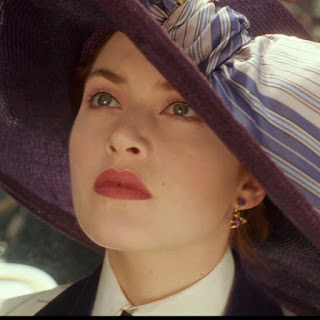 Huge, broad-brimmed hats were worn in mid-decade, trimmed with masses of feathers and occasionally complete stuffed birds (hummingbirds for those who could afford them), or decorated with ribbons and artificial flowers. Masses of wavy hair were fashionable, swept up to the top of the head (if necessary, over horsehair pads called "rats") and gathered into a knot. Large hats were worn with evening wear.

By the end of the decade, hats had smaller drooping brims that shaded the face and deep crowns, and the overall top-heavy effect remained. 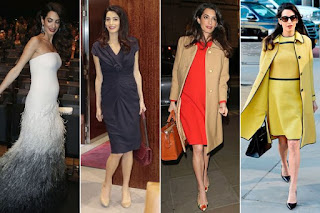 Shoes were narrow and often emphasized. They had a pointed toe and a medium height heel. Buttons, patent leather, and laced models of the shoe were also manufactured and readily available. Similarly, there were shoes for every occasion; oxfords for a tailored costume, slippers with straps for festive occasions or pumps with pearl buckles, and finally, boots which were often edged in fur to stave off the winter chill when riding in a carriage in the winter. At the beginning of 1900s shoes still maintained the same design of the Victorian era. Shoes were commonly made with seal skin or Moroccan leather. Having boots made of seal skin was most common for people in a higher social class. Seal skin boots were known to be extremely durable and could be worn during every season. Boots made from Moroccan leather were more uncomfortable and stiff. World War I caused this opulent era to tone down due to the increased sanctions on the trade of leather and other fabrics, and shoes were starting to incorporate a fabric topping. 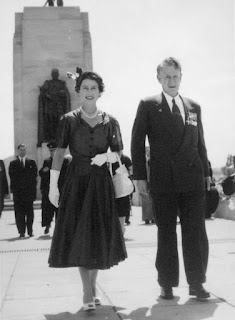 Fashion in the years following World War II is characterized by the resurgence of haute couture after the austerity of the war years. Square shoulders and short skirts were replaced by the soft femininity of Christian Dior's "New Look" silhouette, with its sweeping longer skirts, fitted waist, and rounded shoulders, which in turn gave way to an unfitted, structural look in the later 1950s. 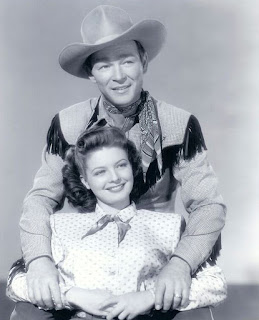 Return of fashion
By 1947, the Paris fashion houses had reopened, and once again Paris resumed its position as the arbiter of high fashion. The "orderly, rhythmic evolution of fashion change" had been disrupted by the war, and a new direction was long overdue. The padded shoulder, tubular, boxy line, and short skirt (that had been around since before the war and was identified with uniforms) was gone. A succession of style trends led by Christian Dior and Cristóbal Balenciaga defined the changing silhouette of women's clothes through the 1950s. Television joined fashion magazines and movies in disseminating clothing styles.The new silhouette had narrow shoulders, a cinched waist, bust emphasis, and longer skirts, often with wider hems. 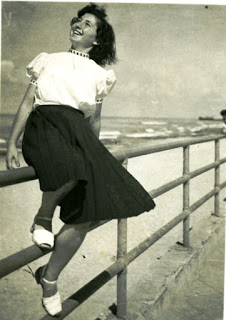 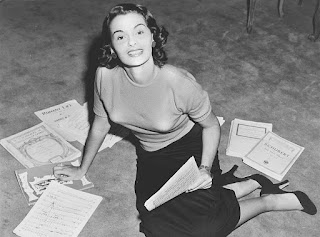 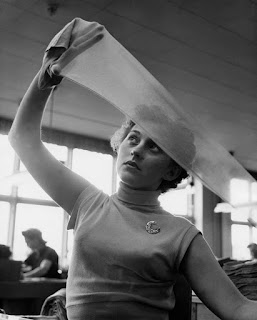 Nylon stockings being inspected in Malmö, Sweden in 1954. 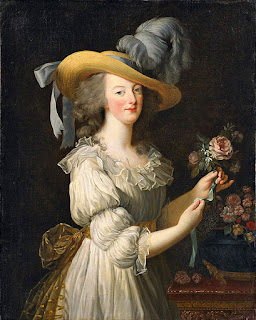